Want to see what’s happening at Schooner House? A few folks have told us they couldn’t find us. Take Johnswood Rd east, past Scammon Cove to McKenzie Pt Rd, turn right and go south one mile. Schooner House, the big white shrink wrap building, is on the right often with a Jeep or two parked there. The entrance is on the southeast side of the building.

This month has been busier yet with the better and warmer weather. Our Canadian buddy Klaus returned to lend a hand for a week. Sean Heiney of Manitou Media and Drummond.org came by to do a video about the project. See the great video at Meet an Islander under the videos tab.

Julie and I laid the tongue-and-groove fir for the sole and the engine space and the lazarette received most of their final paint. The transmissions finally arrived and fabrication has started on an auxiliary drive for a big 24-volt alternator to charge the house batteries. All the deckbeams are in and faired after making a pair of 30-foot plus carlins that join the deck to the cabin sides. Mast partners to hold the foremast are in, and similar blocking to hold the anchor windlass are in, as well as a samson post forward with its blocking.

The centerboard is finally all faired and got a notch in it for a latch (see photo below) to hold it in the “up” position and relieve the strain on the hoisting pennant. The latch itself has been welded up, and 25 more blocks for running rigging have had the working parts made. Next is lifting the 1000-pound centerboard into place and getting the engines in and lined up with the stuffing boxes and struts and secured to the engine beds. Tanks still need to go in and receive their plumbing as well. And there’s lots more painting to be done too, of course.

Want to learn more about Schooner Huron Jewel? Go to www.ditallship.com or stop by Schooner House at 38988 S McKenzie Pt Rd., Drummond Island, MI. If we’re there we’re happy to answer your questions. 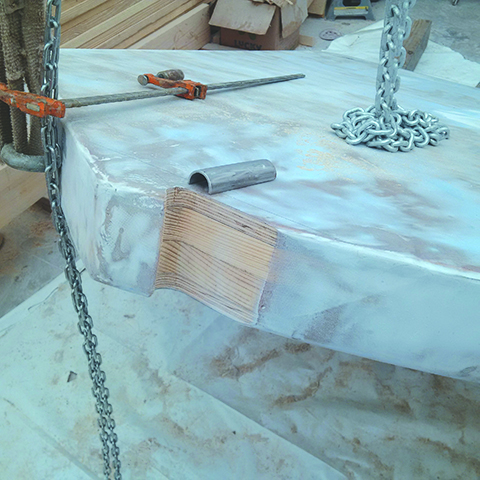 The notch for the centerboard latch. 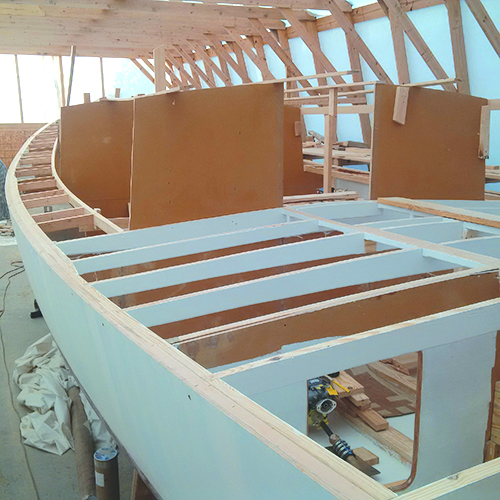 The carlins are in place, which were soon followed by the deck beams.
Previous Post
Next Post

Drummond Island Tall Ship Co LLC is at Ocean Alliance.
Ocean Alliance
Want something fun to do this weekend?
Come to Gloucester and see us for a free dockside tour at Ocean Alliance at the Old Paint Factory, 32 Horton St.
And come learn about the terrific work that Ocean Alliance is doing to keep the marine environment healthy for whale and for all.
Free tours Friday, Saturday and Sunday 10-5

Are you enjoying our voyage? Want to show your support? Visit bit.ly/DreamTourMerch to purchase your Dream Inspiration Tour shirt or hoodie!
Or make a donation at https://ditallship.com/product/donate/

We survived Hurricanes Earl and Fiona and are making our way south to Gloucester, MA.
Please come see us at Ocean Alliance in Gloucester at the Old Paint Factory!
We’ll be doing free dockside tours Thursday afternoon Sept 29 by chance and Friday Sept 30 from 10-5.
Please check out www.whale.org to find out more about this terrific group that is working to “save the whales, save the oceans, save ourselves!”