The schooner has been progressing in the last month (February) despite winter finally arriving and the cold invading the building. The epoxy-sealed interior surfaces have been primed and painted and the cover has come off now that the paint is dry.

Work on the centerboard is coming along with two coats of fairing compound applied to one side to make it smooth over the fiberglass cloth and now we’re about to turn it over again (it weighs a thousand pounds) to fair the other side.

The anchor chain and rigging wire have arrived, and numerous other parts and equipment are filling up the storage area. The propellers arrived from Denmark via UPS in only three days – they are three-blade folders beautifully machined from bronze. Bronze portlights are on the way, as are foam and cloth for custom-made mattress and covers.

Roger came up from Windsor, Ontario with some friends and shaped the spar for the main gaff and started making the first of the four dozen blocks for the running rigging. The launch trailer has been completed and will have to live outside for a while. Deckbeams are in progress now that I’ve faired the sheerline with a plane and the interior structure will be next.

I have to drill a number of big holes in the hull now that various thru-hulls have arrived; like the raw-water intakes for the engines and the head, the discharges for the bilge pumps, and the transducer for the depth sounder, which will go way forward by the foremast so hopefully I can detect shallow water before rather than after finding it with the keel.

The box for mounting the ship’s wheel and hydraulic pump is fairly complete, minus the top cover and paint. It also serves as the exit for engine room air, which comes in at the base of the binnacle, pushed out by a blower (on the way, too). The newfangled patent anchor arrived the other day since the distributor had a big sale. It’s a Spade anchor, sort of an upside-down plow which is said to work much better; but there will likely be a plow on the other chain just to be sure. Speaking of which, we installed the chain box in the chain locker the other day – it has to hold the six hundred pounds of chain and not come adrift when pounding into head seas heeled way over. All in all, it has been a busy month and lots of progress!

Want to learn more about Schooner Huron Jewel? Go to www.ditallship.com or stop by! Schooner House at 38988 S McKenzie Pt Rd., Drummond Island, MI. If we’re there we’re happy to answer your questions. 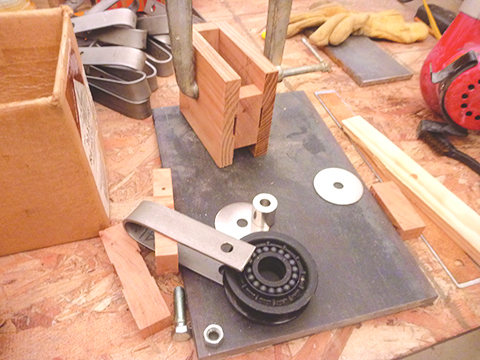 Parts of the rigging blocks. 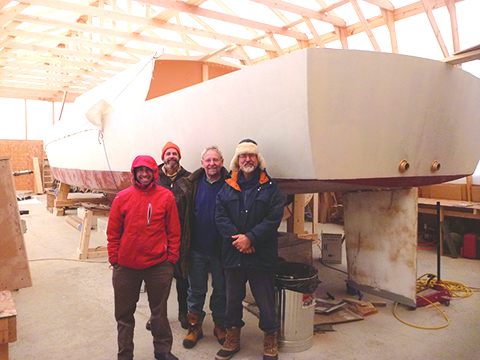 We were mesmerized watching the waves roll in and crash ashore, slowly wearing away the limestone and creating intriguing holes and tide pools.
While we’re in The Bahamas we’re happy to give at anchor tours, so if you see us - come say “Ahoy!”

There had been a natural arch, under which one can see or look through, hence window, the ferocious Atlantic waters raging through to the tranquil Bight of Eleuthra. The natural arch had a road over it and after much storm damage it was removed in the 1980s and a modern bridge was built.

Eddy, Julie and Torie went ashore to walk to the bridge and to see the Queen’s Baths (also knows as the Hot Tubs).

We were mesmerized watching the waves roll in and crash ashore, slowly wearing away the limestone and creating intriguing holes and tide pools.

And Torie found a hubcap set in concrete in the side of a boulder - a rock window?

It was also the day we had used up all the water in one of our fresh water tanks. We calculated that we’d used 6.5 gallons per day for 10 days, which is a great conservative use of water. We’d used it for cooking, washing dishes, and occasionally washing our hair or a sponge bath. We have snorkeled or swam often enough that we haven’t yet felt the need to fire up the on-board fresh water shower.

Fresh water, in The Bahamas is not easy to come by. First, there aren’t that many marinas, let alone available to accommodate our 78 ft length. And not all marinas have water available. When water is available we will probably have to buy it.
Therefore, we anticipate having to fill portable water jugs to fill our tanks when we can find water. So we’re trying to be as conservative with water as possible. It’s not difficult, it’s just practicing different habits, such as using a trickle of water for hand washing, tooth brushing and rinsing dishes. Try it - you’ll be amazed at how little water you actually need.

Drummond Island Tall Ship Co LLC is in The Bahamas.
The Bahamas
Day #160 Thursday, January 26, 2023
We had fun at Hoffman Cay, but are glad to be leaving this anchorage that has strong currents running in and out, depending upon the tide. Capt Hugh and Julie often were up a couple times each night making sure we hadn’t dragged anchor or some one drag into us.

We left the Berry Islands and sailed across the North Province Channel to drop anchor for the night behind Current Island on the western end of Eleuthra Island.

On our way, around 2 pm, Capt Hugh called for the sails to be struck as a squall line had formed. Over his shoulder we saw small funnels dropping out of the clouds. Although it would have been neat to see a water spout, we really didn’t want to encounter one. None formed near where we were, but much further south one did form and cause some excitement for other sailors.